I consider a difference between living a story and telling a story. The word “belief” could apply to both, but the notions are different in a way that might better be demonstrated by example than explained. Telling a story, even to ourselves, comes from the perspective of evaluation. When we live a story, we can’t see the shape of the story in which we move.

Alfred Tennyson penned quite a few Arthurian legends in verse form, the best-known of which is probably The Lady of Shalott (1832). He based this off a 13th century Italian novel, Donna di Scalotta, which I have never read.

One day, Sir Lancelot rode past her tower. After glimpsing him in her mirror, the Lady of Shalott (already established to be “half sick of shadows”) just had to break her curse… by doing the very thing that would fulfill it.

Sometimes, the only way out is through.

Sometimes, you need to break out so badly that you would do anything, even face death.

These were valuable messages that have carried me though some tough times, and if I’d discovered this story earlier (and interpreted it in the same way: before Emilie Autumn added some sass to it, my interpretation had been, “oh, puh-leez, nobody is that hot”) then it would have saved a lot of emotional and mental wherewithal that had gone to coping instead of processing.

I’d rather return to personal experience than take as granted the existence of the gods, because history and archaeology tend to allow for a sort of behind-the-scenes look at religious mythology such that “it was all made up, at least the ‘important’ (that is, empirically effectual) bits” becomes a safe assumption. That’s why I tend more towards psychoanalyzing the supernatural and paranormal experiences that I do have, including theophany.

The Lady of Shalott’s story has meant enough to me that some experience like theophany, or some coalescing of this character out of the billows, should have happened to me.

I thought that such an immediate experience was the only way, if not the best way, to live a story. I can believe in this goddess and tell that story to myself, or I can meet her and no longer need to believe (which understandably looks an awful lot like, “This person believes that they’re meeting some made-up character that for some reason they’re calling a goddess” from the outside.)

Her story means enough to me that it doesn’t need to cross over from resonance to inspiration to numinous imagination like that. I think that it should have, but I don’t want it to. It feels right that it hasn’t. (And not only because she doesn’t have a religion constructed around her to make this fiction socially acceptable to believe.)

The notion, for now, has been enough; and serves to show, by itself, that the other stuff isn’t necessarily more valuable. Even if the Lady is “merely” imaginary, the expression of imagination, and the best use of it, is how it creates new options within the constraining weave of influence. 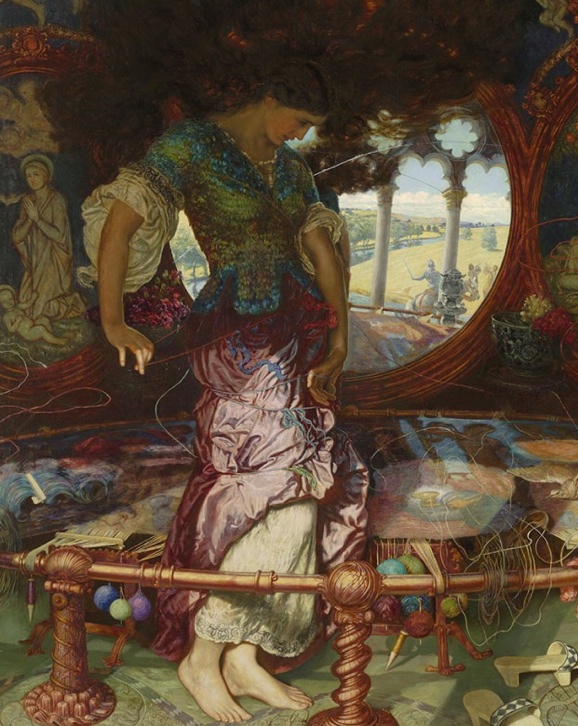 Image from “The Lady of Shalott” by William Holman Hunt (1905)

The death of The Lady of Shalott could be a somehow cautionary tale, even a fetishized and gratuitous one.

Through some retellings, the Lady of Shalott is identified (with) rather than objectified (as).

Through artistic expression at all, her death effectively makes her immortal.

Donations are not tax deductible and go to the blog writer's personal expenses.